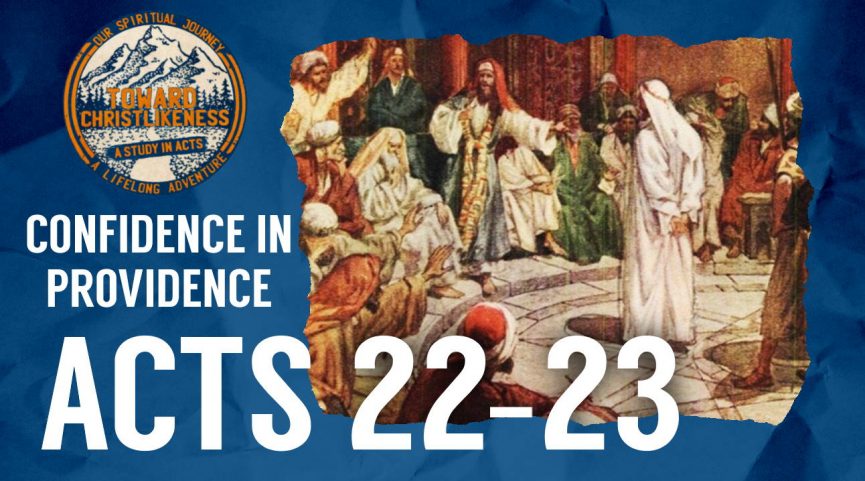 Divine providence is the governance of God by which He, with wisdom and love, cares for and directs all things in the universe. The doctrine of divine providence asserts that God is in complete control of all things. He is sovereign over the universe as a whole (Psalm 103:19), the physical world (Matthew 5:45), the affairs of nations (Psalm 66:7), human destiny (Galatians 1:15), human successes and failures (Luke 1:52), and the protection of His people (Psalm 4:8). This doctrine stands in direct opposition to the idea that the universe is governed by chance or fate.

A life lived for Christ will be a life lived based on trust, loyalty, and faith. God has never had one single second of unfaithfulness. As believers, we gather hope and confidence when we read the Holy Scriptures and walk daily with the Holy Spirit.

Paul boldly shared God’s call on his life with his fellow Jews. His call of God was not well received. He was despised much like Jesus, his Lord and Savior, said he would be. (John 15:17-27)

Paul’s message caused the unbelieving Jews to reject his calling violently. He was arrested again by the Romans. They planned to privately interrogate him.

Paul exercised his earthly rights as a Roman citizen to escape torment at the hands of the centurion and his soldiers. God allowed him to be protected instead of being beaten.

God opened a private meeting for Paul to speak directly with the Jewish leadership (the Sanhedrin). Controversy broke out among the leadership because Paul shared his calling. Paul was arrested by the Romans again and taken away from the Sanhedrin for his personal safety.

Jesus stood beside Paul that night and gave him a new command. Paul was encouraged. His confidence in Providence grew.

Do you have confidence in the Divine Providence of God?

Do you walk daily in holy boldness sharing the love of Christ with a watching world?