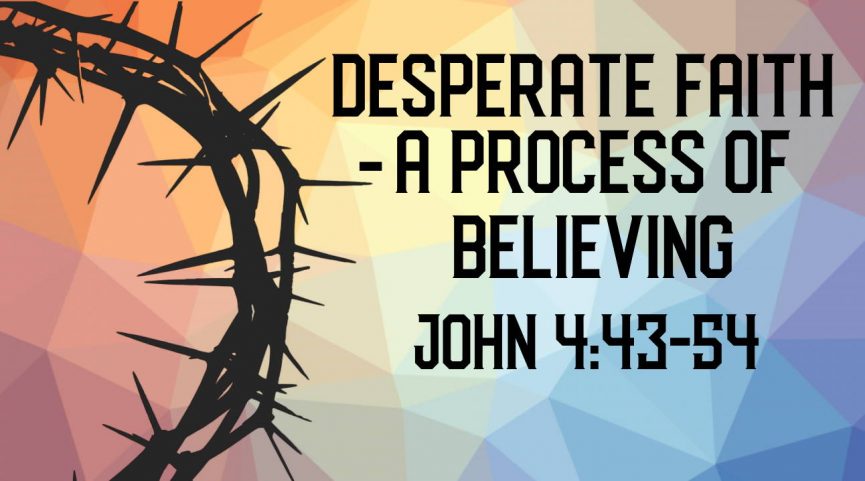 Jesus was welcomed back to Galilee – the Galileans knew they had a miracle worker from God in their town. They were excited to see more miracles and signs. A royal official (noble man) met Jesus that day and asked for healing for his son. Jesus listened to the man, the man listened to Jesus – Jesus changed his life.

The royal official was desperate because his son was dying. Jesus was his last chance before making the funeral arrangements. Look at these five things this desperate man did:
1. He perceived Jesus was a miracle worker from God. He had some faith that Jesus could heal his son. John 10:37,38
2. He conceived an idea to beg Jesus to come to his home and heal his sick son.
3. He received a true word from God which caused him to have a crisis of belief. He listened to Jesus in desperate faith. John 6:63-69
4. He believed the testimony of Jesus to be faithful. He did what Jesus said to do. He surrendered his faith fully to Jesus and headed home. Ephesians 2:8,9
5. He achieved his mission – his son was physically healed the exact time Jesus said he would be. In the process of healing the man’s faith, and healing the son’s body, as only God can do, this man and his whole household were healed spiritually. The Bible says the whole household believed. This would include all servants. Revelation 7:9-12

We all have or will have those times in our lives when we desperately need a word from God. We need wisdom and direction. We need answers that only God can give.

God is right here walking life with you. Like the man in the story, we must completely surrender to the Lord and by faith and allow the Holy Spirit to guide us day by day.