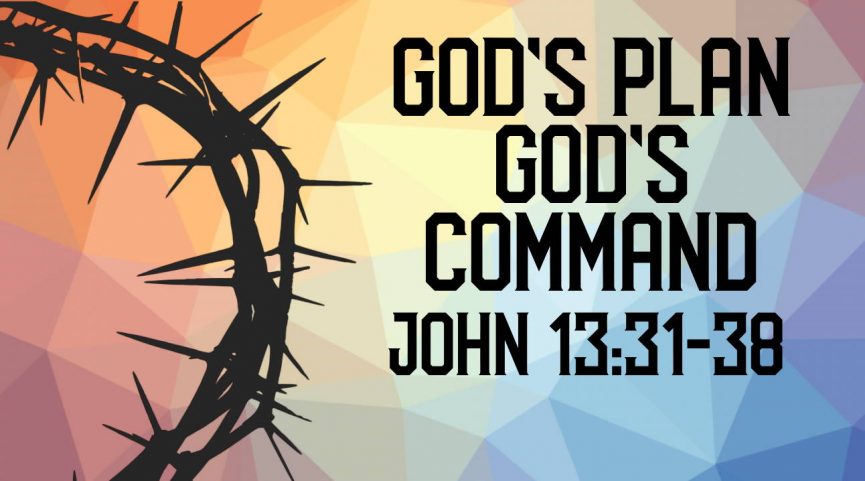 God’s Plan God’s Command – John 13:30-38
Judas left the meal celebration. He went off into the darkness of night to complete the sinful deal he had struck with the chief priests and elders.
When Judas left, Jesus spoke clearly to His disciples of God’s holy designed plan. Philippians 2:6-11

Jesus used His title, “Son of Man,” to emphasize His servanthood and humility. God took on flesh and died a death all of mankind deserved. Jesus paid it all. Romans 5:8; Colossians 1:13-14
Jesus brought honor and glory to God the Father through His obedience. Jesus was God’s fullest example of love on display.

Jesus promised that God the Father would glorify Him immediately. This occurred with Jesus’ death on the cross, burial, and resurrection.

Jesus told His disciples of His imminent departure. He knew they would be like little children who would face immediate fear, stress, doubt, and great uncertainty. Jesus had compassion for His disciples. 1 Peter 5:6,7

Jesus earlier told the unbelieving Judaizers that He was leaving and they would seek Him but where He was going, they would never go. They thought He was going into exile or going to commit suicide. John 7:32-36; 8:18-24

Jesus informed His disciples that they would seek Him, but then He tells them about a new commandment in the middle of their fear – “love one another.” They could not follow Him where He was going – now, but would follow afterwards.

The disciples were prideful, competitive, fighters, given to outburst of anger, arrogant, among other things. Jesus’ command to love one another would prove crucial for these men in fulfilling God’s plan. Galatians 5:22-26

Jesus commanded His disciples to be identified as those who love.