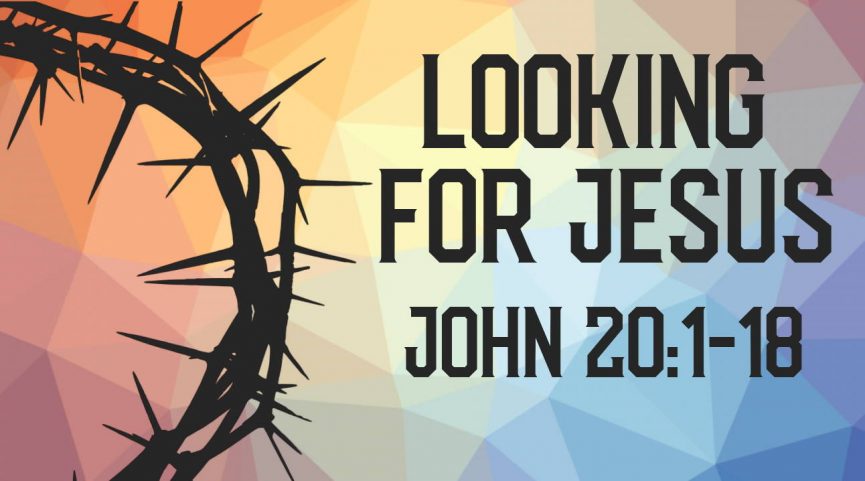 Looking For Jesus – John 20:1-18
Jesus’ resurrection was a complete and victorious defeat over death. The Holy Son of God overcame death once and for all. (Acts 2:24) Scripture teaches us since Jesus conquered death, we as Christian believers have also been granted victory over death. We are “more than conquerors through Him who loved us.” (Romans 8:37) When Scripture speaks – God speaks. When we seek Him first, He will show Himself, because He is faithful. Matthew 6:33

Mary Magdalene truly loved Jesus with a God-honoring love. She rose early Sunday morning to visit the tomb where Jesus was laid.

She along with other ladies visited Joseph’s tomb to anoint the body of Jesus as was the custom of the Jews. They were not looking for the living among the dead.

Mary was looking for a dead Jesus – she panicked over a missing corpse.

Mary ran and reported the empty grave to Peter and John.

Both Peter and John ran to the burial tomb. They both viewed the massive entrance stone out of the way, an empty tomb, and the linen graveclothes of Jesus.

Peter marveled at what he saw. John began believing in the hope of the resurrection when he looked at the evidence.

Peter and John returned to their homes. Mary returned to the tomb. Weeping, she looked in the tomb and had an encounter with two angels. Mary could see the empty grave but instead of a resurrected Lord, she thought someone stole the corpse of Jesus.

Jesus has compassion and spoke with Mary. When Mary saw Jesus, she rejoiced and desired to embrace Jesus strongly.

Jesus gave Mary a commission to Go and tell His brothers the Good News, while He ascended to God the Father. Mary obeyed the commands of Jesus.