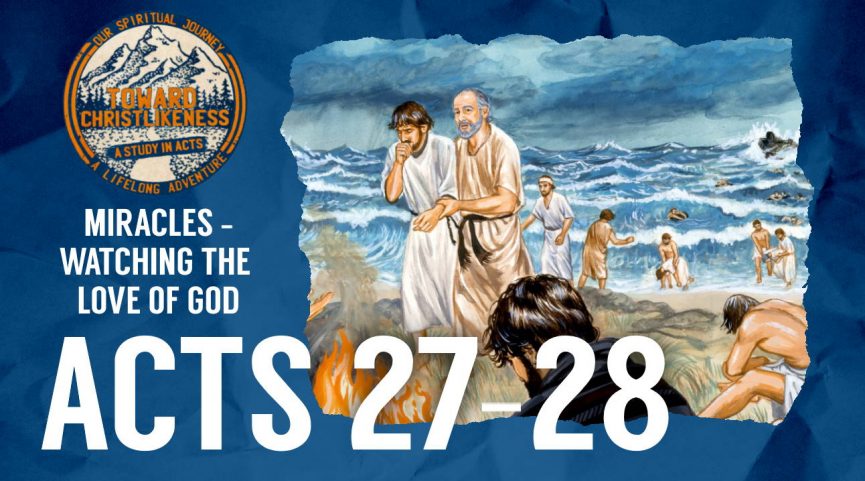 Paul and all 275 soldiers, sailors, and others onboard the Alexandrian ship, ended their voyage with a violent crash on the rock face off the coast of Malta, in the middle of a heavy storm. Paul prophesied that an angel of God encouraged him to share with all onboard that no one would die. God’s miracle of salvation happened just as Paul preached.

God miraculously demonstrated His power causing nature to force the Alexandrian ship to crash just as He ordered. God has power over the seas.

In the middle of the storm, God miraculously caused every man to get to land safely. This demonstrated His trustworthiness. Even the pagans could not deny the miracle they experienced.

After they all made it to land, God caused the islanders to show all the men unusual kindness. They kindled a fire for the castaways and welcomed them because of the shipwreck, rain, and cold.

Paul helped gather wood for the fire and as he tossed his sticks into the fire, a serpent came out from the heat and latched on to his arm. Paul shook off the snake into the fire. The shipwrecked men and the islanders watched as God miraculously kept Paul from suffering any ill effect.

God showed Paul favor. Paul was shown hospitality by one of the leading citizens of the island. The man’s father was sick. God miraculously allowed Paul to exercise his Apostolic authority and heal the man. All who had diseases came to Paul for healing and he miraculously healed them.

Salvation obviously came to the Island Nation of Malta. Paul would not demonstrate God’s power of healing without giving the message of salvation through Jesus Christ.

Three months passed and their voyage continued on a different Alexandrian ship that had wintered in Malta. God caused one ship to crash and another ship to dock.

God gave Paul and his disciples encouragement as they met other believers when they landed in different ports. Paul thanked God and took courage as he journeyed to Rome.

When arriving in Rome, God miraculously caused Paul to receive favor from the Roman Centurion. Paul experienced freedoms the other prisoners did not. God always wins!

Can you see the hand of God in Paul’s life? Can you see His hand at work in your life?

Are you willing to give God thanks in the difficult times? He is worthy!