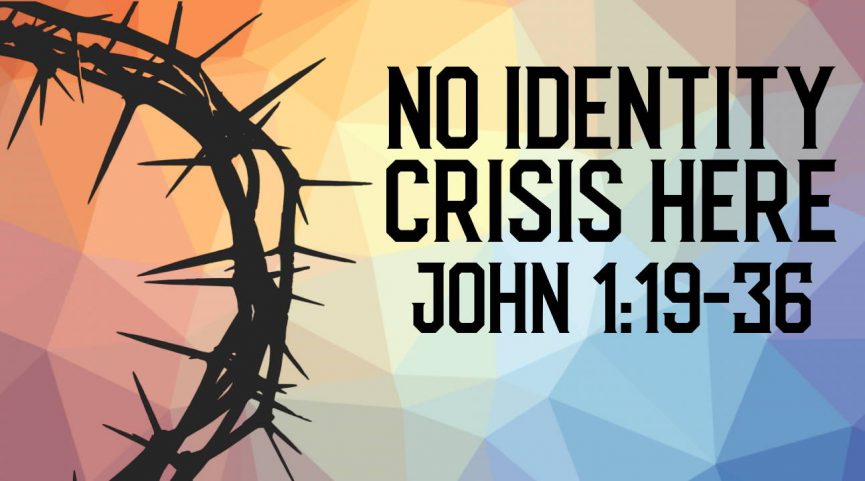 No Identity Crisis Here – John 1:19-36
John the Baptist was a prophet. He fulfilled the words that were prophesied about him in Isaiah 40:3-5. John was part of God’s master plan of salvation. Jesus recognized John’s role in God’s great story by being baptized by John (Matthew 3:13-15) and by acknowledging John’s obedience, (Matthew 11:7-11). John wanted all attention on Jesus, he did not suffer identity crisis.

The Pharisees sent official messengers to John the Baptist to ask who he was. John fearlessly proclaimed Jesus as Lord to his culture and cultures leadership.

John did not take upon himself any title, except the one God gave him through the prophet Isaiah 40:3-5. He was a messenger – “I am the voice of one shouting in the wilderness, ‘make straight the way of the LORD,’ as the prophet Isaiah said.”

John strongly taught he baptized with water. God revealed to him the Son of God would baptize with the Holy Spirit.

John was able to see with spiritual eyes.

John identified publicly – Jesus as the Lamb of God.

John introduced the multitudes to Jesus.

John had no identity crisis. John knew who he was in relationship with God. God revealed to him who Jesus was. John’s job was to help people meet Jesus.

Do you know who you are in relationship with God?

Do you see your life through spiritual eyes?

Have you personally met Jesus?