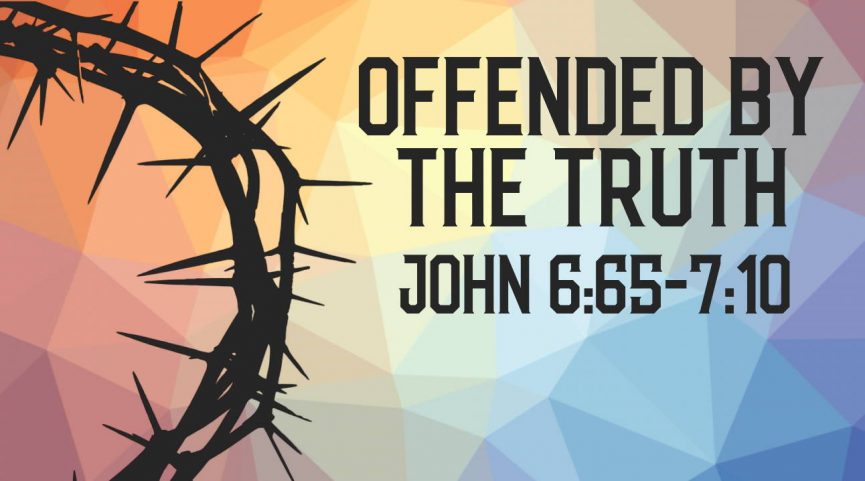 Offended by The Truth John 6:65-7:10
When the truths of King Jesus and truths about His Kingdom are shared, some are drawn to Him and many turn away. The deep truths Jesus shared were and are often misunderstood. Jesus (God the Son) knew some would reject Him and some would receive His truth. Even Jesus’ earthly half brothers suffered from unbelief.

Jesus always speaks with clarity. Even if the teaching is a deep truth, the Holy Spirit will help with the understanding.

Peter believed. He expressed to Jesus how the remaining disciples had come to believe that He was the Holy One of God, the Christ, Son of the living God.

The unbelieving religious leaders were looking to kill Jesus. They knew He followed the Law of Moses. The Law required all Jewish males to celebrate the Feast of Booths, appearing before the Lord in the Temple. Deuteronomy 16:16; Leviticus 23

Jesus was the First born, therefore the oldest. His brothers, in there unbelief, challenged Jesus to make Himself know publicly to the world during the feast.

Jesus confronted His brothers in their unbelief with truth. He waited on God for His time to be fully revealed. Jesus remained in Galilee.

Jesus honored God’s timeline and privately went to the Feast of Booths.

In the middle of the vast crowds, the religious leadership looked diligently for him so they might persecute Him.

Even the crowd was stirred by the pursuits of the Jewish leadership. There was a lot of whispered discussion and murmuring among them about Jesus. Some said He was good, others said He misled people by giving them false ideas.

No one shared their opinion openly because they feared the religious and political leadership.