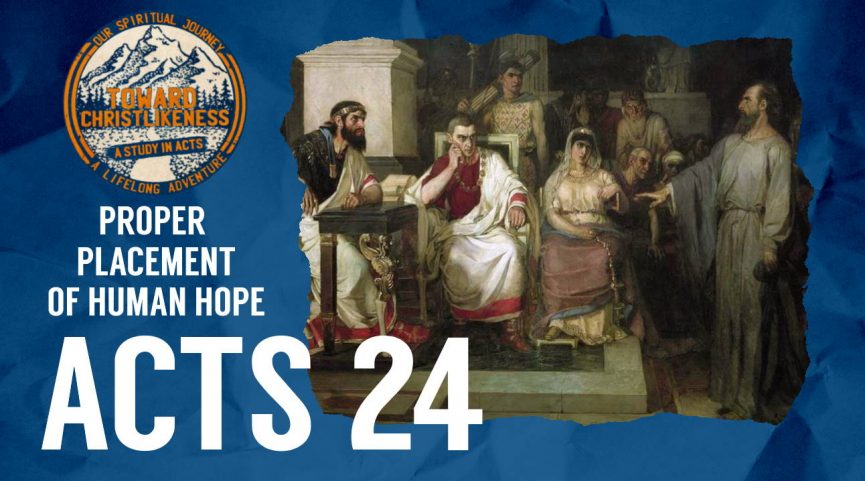 When we talk about our hope in Jesus, we speak about having a know-so hope. People spend their lives hoping for random things. Some hope for marriage, some hope for children, some hope for great riches and the list continues. Just after our Easter celebrations, we have the know-so hope in the resurrection of Jesus Christ our Lord. We have eternal life!

Paul was arrested and taken under heavy guard to see the governor, Felix. God had and still has so many ways to protect His children. Psalm 23:1-7

Paul had many false allegations levied against him by the religious leadership. They called him slanderous names and lied about his activities. Their hope was to have him condemned.

The unbelieving Jews turned against Paul and declared the false allegations and name calling to be accurate. They lied and hoped to be accepted by their religious leadership and condemn Paul in the process.

Paul advocated for himself. He addressed Felix and responded to the words his accusers said. He confronted them and denied their words as false. Paul spoke truth.

Paul confessed to being a follower of the Way and worshiping the God of his fathers.

Paul expressed his hope was in God alone. He spoke with clarity of his belief in the resurrection. Philippians 3:7-11

Felix understood the things Paul confessed. He knew of Jesus and his followers. He chose to adjourn the trial until the Commander Lysias (the arresting officer) could attend. He gave Paul some freedom to be visited by friends.

Felix had Paul give his testimony before he and his wife. Paul preached about the sins of the flesh and about holy living. This caused Felix to be afraid and send Paul away until a more convenient time. This is called the conviction of the Holy Spirit. Galatians 5:13-26

Although Paul offered Felix the hope of salvation and eternal life, Felix hoped Paul would give him money for a bribe. For two years he conversed with Paul often.

Where is your hope today? Are you hoping in something other than God’s will?

This week, who will you share the know-so hope you have in Jesus?

Have you been waiting for a convenient time to receive the free gift of salvation? Do not let your time pass you by.