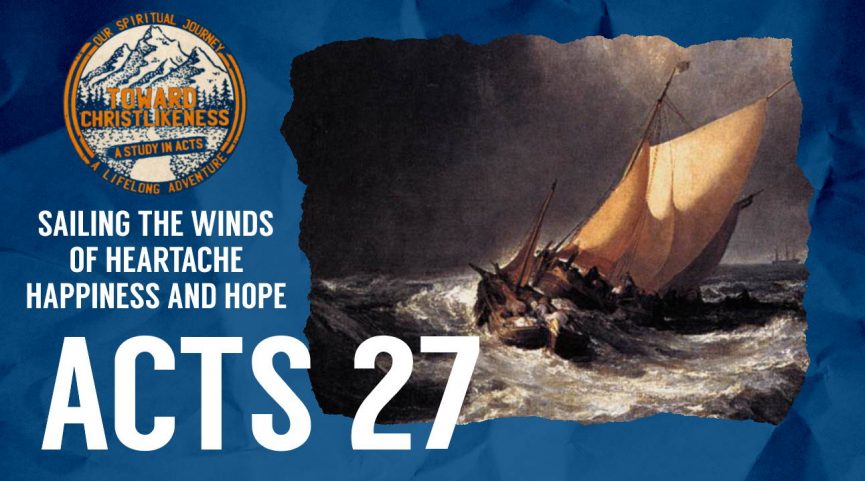 Paul was finally sent from Judea to Rome, as a prisoner. Being innocent of any crime, Paul, in chains, remained committed to preaching the gospel of Jesus, wherever God sent him. Though his life was difficult at times, Paul knew God’s Sovereign Hand was upon him. God remained faithful through his heartaches, happiness, and hopes.

God put people in Paul’s path to give him encouragement. God loved Paul.

Paul was on a dangerous voyage. Satan wanted to destroy him with the danger, God wanted to show His power through the danger. God won!

Paul gave fair warning to the owner of the ship and the sailors of the danger they would encounter. Intending to reach a better winter port, they pressed on.

Tempestuous winds came upon them in the Mediterranean Sea. The ship was in distress. The men onboard the ship did everything humanly possible to keep her afloat.

Paul encouraged the men aboard the ship. He told them to take heart because God had sent an angel to detail the outcome of this part of the voyage.

Paul told the men, God wanted him in Rome. He shared his faith with all onboard in the middle of the storm. They listened to him this time.

The sailors fought the foul weather and did their part to keep a sinking ship afloat. Paul encouraged them all to stop and eat. The men were encouraged and ate.

God had a plan for Paul. God had a message for the men aboard the ship. God was there with them in the middle of the storm.

God will be with us before, during and after the storms of life. He is good, He is faithful.

Have you ever wondered if God was with you in the storm?

Have you trusted God for the outcome of your circumstances?

GOD IS FAITHFUL – TRUST HIM