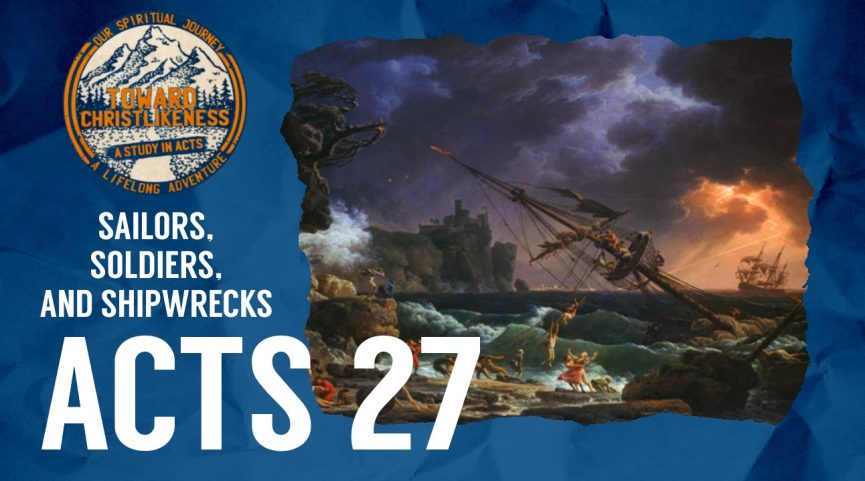 The Greek word translated “courage” and “good cheer” means literally “boldness and confidence.” In the Bible, courage is the opposite of fear. When God commands us to fear not, to be of good cheer, and to have courage, He is always commanding against fear, which is the opposite of courage. Chaos on the other hand is defined as “complete disorder and confusion.” All 276 people onboard this ship were experiencing chaos, but through the grace of God and the courageous leadership of Paul, confidence arose.

Paul encouraged all his fellow passengers with a word from God. We have that same Word today when chaos may seem to surround us, “take heart – believe God!”

Paul explained what must happen to the ship and to the passengers and crew. God planned a ship wreck.

God allowed Paul to perceive the sailors were trying to abandon ship in the middle of the storm under the pretense of putting out anchors from the front of the ship. The sailors planned to escape.

Julius ordered his soldiers to cut the ropes and loose the skiff. This all happened under the cloud of storm and the cloak of darkness.

Morning broke and Paul encouraged everyone to take food. He used this time of need to thank God and have a worship service in the middle of the storm. Everyone was encouraged.

With new found hope and the sight of land, the sailors cut anchor, hoisted the sails, and headed for shore.

Just when things looked promising, the ship run aground. The waves violently battered the trapped ship from the rear, causing it to begin breaking apart. The soldiers planned to execute all prisoners for the sake of duty.

Julius kept the soldiers from their plans and ordered all to abandon ship. Those who could swim had to go first and those who could not had to find a flotation device.

All escaped safely to land, just as God said through Paul. We see God’s mighty, all-powerful hand at work in the lives of all 276 people!

Are you in a storm of chaos today?
Are you courageously trusting God?