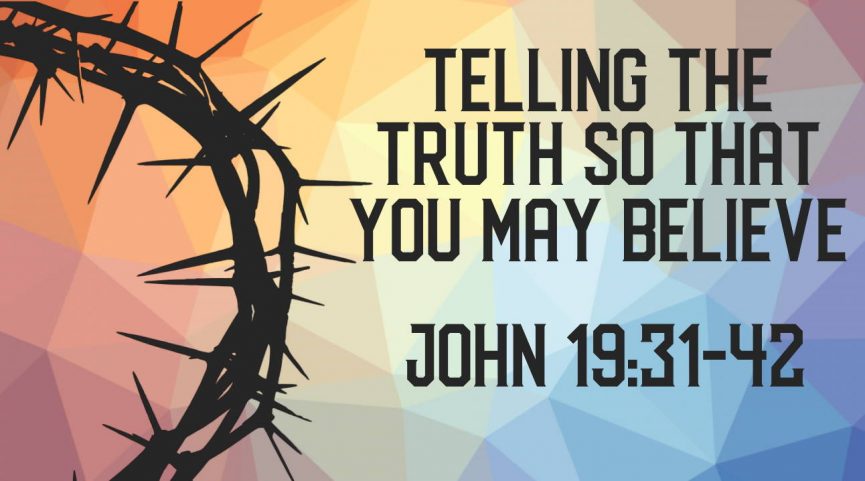 Telling the Truth So That You May Believe – John 19:31-42
Even Pontius Pilate’s decision to hand Jesus over to be crucified was the plan of God. He uses every story for His glory.

Humanly speaking, we refer to the events of the cross as a tragedy, although the event was actually the perfect plan of God. Scripture had to be fulfilled.

The Jewish rulers did not want the bodies of the crucified to remain on the cross during the high holy day referred to as the Preparation Day. They were so maliciously religious, that they asked Pilate to break the legs of the crucified and take down their bodies.

At Pilate’s command, the soldiers came and broke the legs of the two men crucified with Jesus. When they came to Jesus, He was already dead, therefore they did not break His legs. Exodus 12:46; Numbers 9:12; Psalm 34:20

One soldier impaled Jesus with his spear and immediately blood and water came flowing out of His body. Zechariah 12:10

John emphasized his eyewitness truth of the events of the cross of Christ. Being led by the Holy Spirit, he recorded the event for all of humanity, the sacrifice of our Savior, so all might believe. This is the purpose of Scripture, that you might believe.

Jesus had authority over His own death. He died so that Scripture may be fulfilled. Jesus never violated Scripture.

Joseph of Arimathea—a disciple of Jesus, but secretly for fear of the Jews—asked Pilate to let him take away the body of Jesus; and Pilate gave him permission.

Nicodemus, who had first come to Jesus at night, also came. He and Joseph wrapped Jesus’ body in linen and burial spices. They closed the tomb with a stone. John 3:1-21

Jesus was buried in Joseph’s family tomb. This tomb had never been used for burial. Jesus only borrowed the rich man’s burial place in the garden.

Jesus perfectly carried out the will of God! Jesus is the Victor over death, hell, and the grave.

Have you rejected the blood and cross of Jesus?
Have you received Jesus Christ as your Lord and Savior?