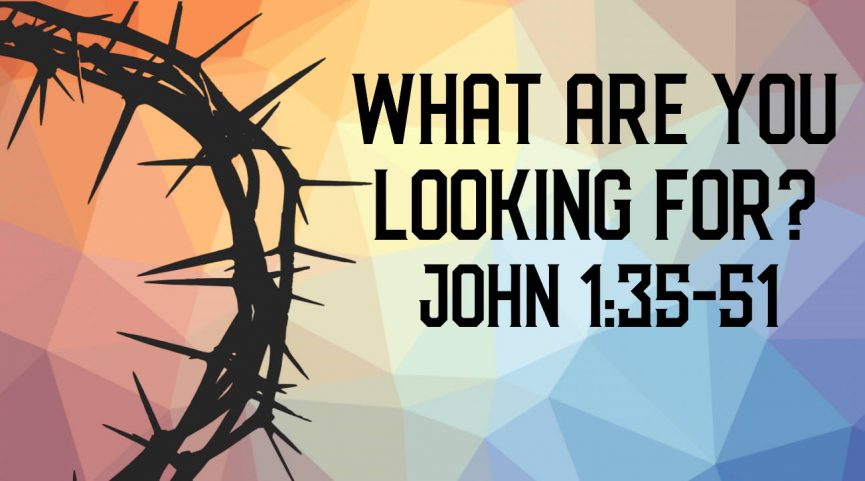 What Are You Looking For? – John 1:35-51
John was back at his post fulfilling the job God called him to do. The Holy Spirit gave John the ability to see with spiritual eyes and recognize Jesus as the perfect and ultimate sacrifice for sin, God’s Passover Lamb.

John introduced two of his disciples to Jesus as the Lamb of God.

John’s two disciples heard him speak and they followed Jesus right away.

Jesus asked the two – “What are you looking for, or what do you seek.” They wanted to know where Jesus was staying so they could go there. They were seeking Christ first. Matthew 6:33

Andrew’s first faith act after meeting Jesus was to find his brother Simon and introduce him to the Messiah!

Jesus let Simon know He knew him. Jesus looked at Simon and gave him a new name.

Philip had a Divine appointment with Jesus when He traveled to Galilee. Jesus called Philip as a disciple. Philip obeyed.

Jesus demonstrated to Nathaneal He was the Son of God. Nathanael confessed and believed Jesus as Son of God and King of Israel. Romans 10:9-13

Jesus promised these new disciples greater spiritual experiences as they put their full faith and trust in Him.

Have you personally met Jesus today?

Do you believe Jesus came to save sinners from their sins?

Are you daily being obedient to His Word?

What are you looking for?