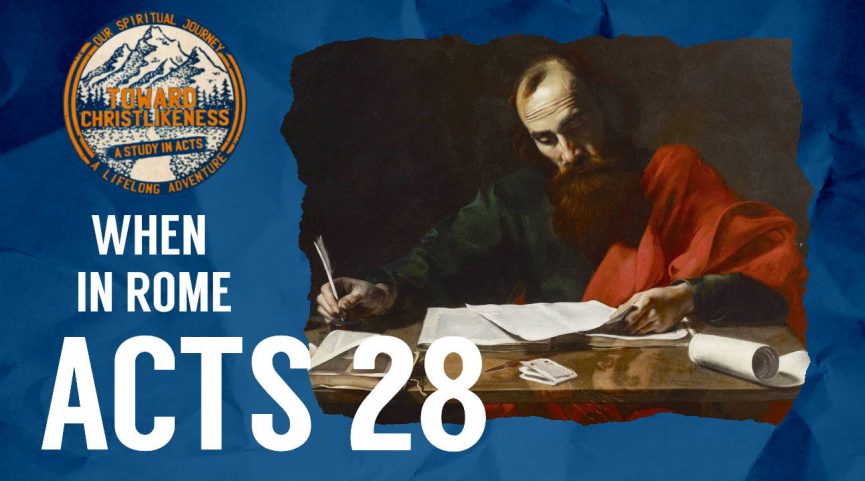 Paul reached God’s destination for him – Rome. God took Paul on many Kingdom adventures. Paul’s missionary travels and preaching were part of God’s eternal plan. God ends the Book of Acts with Paul having confident authority to preach Jesus to all in Rome who would hear.

Paul, although a prisoner, was a Roman citizen, and therefore was permitted to stay by himself [in a rented space] with a soldier guarding him. Paul was in a type of home arrest.

Paul called for the Jewish leadership in Rome to meet with him. He briefly explained why he had been arrested.

The leadership explained they had not heard anything from Judea about his arrest, but they desired to hear from him about Christianity. Up to this point, everyone was speaking against it.

The leadership calendared a day and returned to Paul’s rented quarters to hear him. They came to his lodging in large numbers. Paul carefully explained Christianity to them from morning until evening, solemnly testifying about the kingdom of God and trying to persuade them concerning Jesus, both from the Law of Moses and from the [writings of the] Prophets.

Some were persuaded by what Paul preached about Jesus, but others would not believe. (Romans 1:16,17)

The Gospel of Jesus Christ divided the Jews. Those who believed and those who did not believe were divided over the Scriptures.

Paul preached in Rome for two full years [at his own expense] in his own rented lodging and welcomed all who came to him. Paul consistently proclaimed the kingdom of God and taught about the Lord Jesus Christ with all openness and boldness, unhindered and unrestrained. (Matthew 28:19,20)

We have freedoms today because of God’s grace. Many men and women have died so that we may continue in freedom. Are you using your freedom to share Jesus?